Preface to “Being Unstoppable” a book by David Chard 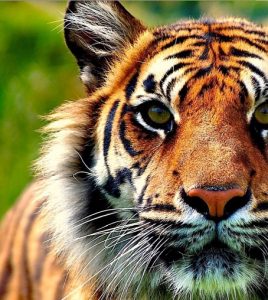 First, allow me to begin with a very old story….

The Story of the Tiger and the Donkey

Once upon a time there was a tigress that was about to give birth. One day when she was out hunting she came upon a herd of wild donkeys. She gave chase, and even in her condition, managed to kill one of them, but the stress of the chase forced her into labor, and she died as she gave birth to a male cub. The donkeys, which had run away, returned when they sensed that the danger was over. Approaching the dead tigress, they discovered the newborn cub and adopted him into their herd.

All went well until the day that an older male tiger approached the donkey herd and attacked and killed one of the donkeys. The rest of the donkeys ran away as soon as they saw the old tiger, but our tiger/donkey saw no reason to run away, of course, as he sensed no danger.

Frustrated by his lack of comprehension, the old tiger dragged the young one back to the place where he had made his kill. There he ripped a piece of meat from the dead donkey and shoved it into the mouth of our young friend.   We can well imagine the young tiger’s shock and consternation.

At first he gagged and tried spitting out the raw flesh, but the old tiger was determined to show the young one who he was, so he made sure the cub swallowed this new food, and this time there was a change. Our young tiger now allowed himself to taste the raw flesh and the warm blood, and he ate this piece with gusto.

When he finished chewing, the young tiger stretched, and then for the first time in his young life, he let out a powerful roar – the roar of a mighty jungle cat. Then the two tigers disappeared together into the forest.

It is as though we awaken from the dream, look around, and become aware of a totally different reality.   Like the tiger/donkey, we are all raised in cultures and families where we are trained to think, feel, and see in specific, predetermined ways. This is our “reality” given to us by the culture of our origin.

I assert that, like the “donkey” in the story, you can also experience an ‘awakening’ when you reconnect with who you really are. It is interesting that the story does not say the donkey had to change, needed to attend a university, find a guru, needed to make a certain amount of money or add anything at all to itself. It was fully, wholly and completely a Tiger, living the ‘trance’ of being a donkey, and the only thing needed was to wake up from the trance and remember its true identity.

All that was needed was for the animal to reconnect with its true essential nature and to move on with the confidence and power that were its natural birthrights. This essential nature is what I call your ‘Diamond Nature.’

“We are not humans trying to become spiritual; rather we are spiritual beings having the experience of being human.”

This book has ONE essential message: there is nothing wrong with you. You don’t need to add anything at all. You just need to wake up.

In the words of my mentor, Jack Elias, who studied with Tibetan master Chogyam Trungpa:

“Waking up, rather than changing how you act, initially, is more akin to having been acting in a dark room, and, suddenly, the lights are turned on. From one perspective nothing has changed, but from another, everything has changed.

“You will be moving into the wakefulness that allows people to see that they don’t have to fix their problems if they realize they can dissolve them. You will understand how to walk away from problems and experience them dissolve of their own accord because they were unreal to begin with.”

It follows then that you are already Unstoppable because Being Unstoppable is your essential Diamond Nature, your original nature that is in that dark room patiently awaiting the moment when you turn on the lights. And I claim that there is only one power great enough to keep you in the dark: you, and the false beliefs you have agreed with in the course of your life, and the false selves that arose with each belief. Consider that these beliefs act like a magic potion that has put you and most of humanity into a trance.

As in several of the Grimm’s fairy tales, it is as if the evil witch has cast a curse upon the human race and we have become like frozen statues of stone. Personally I cannot think of anything more bizarre than for free, flowing, emerging, evolving spiritual beings to become fixed and frozen in a block of stone. But, I assert, that is what happens to us.

And, just to stay in this ‘frozen’ constricted state requires a huge amount of energy. Just as a freezer requires electricity to turn water into ice and keep it frozen, it takes our own energy to stop ourselves from being who we really are and ‘freeze’ ourselves into a fixed state of being. And, using all that energy, depletes us, wears us down and can leave us feeling tired, unworthy and even depressed. Yes, it can.

But you don’t need an icepick to set yourself free. What you need is a way to remove the obstacles to the awareness of your natural Unstoppability. That is another theme of this book: discovering, naming and discarding the obstacles that are currently blocking your awareness of who you really are. Nothing needs to be added; but quite a few of the obstacles need to be removed so you can see clearly again.

I claim that the majority of these obstacles take the form of Beliefs. When you are stressed, stuck, blocked, suffering, not achieving your potential, the main cause is the beliefs that are running your life; the beliefs and thoughts that block your Diamond Nature and absorb your life energy. Those beliefs choose what you see and even what you feel…or don’t feel.

Disclaimer: There isn’t anything ‘new’ in this book. The wisdom and understanding found here come from many sources and they have mostly been available for thousands of years. All I have done is to put them together in a new way, hopefully to make the ideas easier to understand and apply. You are invited to explore these ideas and use them, or not, to have a more enjoyable experience as a spiritual being learning how to be human. In truth, there is little to learn; rather, there is a great deal to un-learn.

Consider this idea: the real you is already here, just waiting to be released from the bondage of the false self you accidentally, and innocently, created. We all do it, and, we can all un-do it. The real challenge is not to learn anything new; rather it is to un-learn and discard what you think you ‘know,’ along with the false self that ‘thinks’ it knows something.

A seeker asked the great advaita sage, Ramana Marharsi, “How do I find my true self?” He replied, “All you need to do is ‘go back the way you came.’ He didn’t mean that the man should fly back to London where he lived. What he meant was, “Go back to the you that existed prior to the false self that you made up.’ Back to who he really was before all the conditioning had been imposed upon him, back to the Essence connected to All That Is— that which we really are.

Going back the way you came is a process of discarding all that is not you until the authentic you is all that’s left. As in the Grimm’s story “Hansel and Gretel,” you are invited to follow the cookie crumbs you left behind you, the clues that will lead you back to the place from which you came…the place you never truly left.

So this book is mostly about un-doing, rather than doing; un-learning rather than learning. And, even un-doing and unlearning needs your effort and participation. But we want you to know it is easier than you think, and at the same time, harder than you might imagine. What you need to do is keep an open mind and continuously let go of the ridiculous belief-driven fears that currently stop you, and do the work, consistently, over time.

Un-doing and un-learning, for most people, is not a one-time process. It takes time but perhaps less time than you might imagine. Once you get started you will begin to enjoy the process of reconnecting with your unchangeable Diamond Nature at the core of yourself: the you that is truly who you are.

In this book, you will find many useful resources, from a wide variety of sources including:

I invite you to read at your own pace, question everything, explore, doubt, consider and apply these resources to your own journey. I approach the theme of ‘Being Unstoppable’ from many different angles, some may speak to you, others may not.

And I want you to know that, as you will see, I am just as susceptible to the traps and pitfalls of believing ludicrous thoughts as anyone else: I have feet of clay and I still get into my pants one leg at a time. In spite of the awareness of my Diamond Nature, I still make ridiculous mistakes and continue to learn from them. And, so what? You don’t need a ‘perfect’ teacher; what you need is persistent focus, commitment, and trust in yourself. All of which are within your power to choose. In truth, you are the only teacher you need.

So, as Anthony Robbins says, “I am not your guru.” In truth you are the only ‘guru’ you need to awaken yourself to your true nature, your true potential. My passion for this subject matter derives from my own personal, and sometimes painful, journey to move beyond the barriers, to an authentic perception of my true nature, and to share them with you.

Michelangelo was the amazing Italian sculptor and painter who carved the Statue of David from a single block of marble. The statue was so beautiful, so utterly perfect, that no one could understand how he managed to do it. His answer was simple:

“At the moment I saw the block of stone, I saw David, whole and complete, trapped inside it. He was already there, waiting to be released.

“All I did was remove everything that was not David.”

Now you, as an Artist, have the same opportunity to release yourself from bondage, not by chipping away pieces of stone, but by chipping away the ideas, thoughts and beliefs that imprison you when you cling to them. It may happen quickly or slowly, but it will surely happen if your passion to be free is greater than your desire to be comfortable. There is nothing to add. You only need to wake up and realize you are already, assuredly, Unstoppable. J